Markazi province is one of the long-standing centers of Iranian carpet weaving. Farahan is a large area of ​​Markazi province that includes more than 200 villages and weaving centers. Sarough, as a prominent Iranian carpet brand, is one of the most important centers of carpet weaving in Farahan. Farahan carpet, which has been the origination and the first carpet of Markazi province, began to grow, develop, and flourish in the middle of the Qajar period due to the presence of Tabriz merchants and then the establishment of foreign companies in Sultanabad. It was at this time that Farahan Carpet found its true identity with the help of a coherent and coordinated management and exemplary quality of production.Currently, Farahan and Sarough carpets are presented in the most prestigious museums, collections, and galleries around the world. The quality of weaving, brightness and sparkle of colors, and beautiful and varied patterns (which are the result of the attitude, taste, talent, and imagination of Iranian designer artists) have made them unique. As a result, during the ups and downs of economics and art caused by global challenges, they have always been interesting, as components of identity and quality, for the manufacturers in all eras, especially the recent decades.
Farahan Carpet Company is one of the most prominent manufacturers of Farahan carpet, which has been working in this field for almost six decades. This company is based on indigenous, national, and transnational standards and consciously follows a purpose. It examines the needs of the market and the customers in order to offer coherent products with two traditional and modern approaches. The destination and target markets of most of these products include the United States, Europe, and the Far East. In Farahan Carpet, all the steps and production processes from the beginning to the end are performed under the supervision of the company's managers and experts. The lack of resources in the field of Farahan carpets highlights the need for this research.
In sources which briefly refer the carpets of Markazi province and its subordinate cities and villages, such as "Persian carpet" (Edwards, 1989), "Persian carpets" (Hangeldin, 1996), "Ghalin” (Sabahi, 2014), “Study of Persian Carpet” (Jouleh, 2011), and “Golden Sunset of Sarough Carpet” (Sooresrafil, 1993), there have also been some brief and general references to Farahan carpet and its villages, such as Sarough. In addition, in recent years, studies have been conducted on the carpets of Markazi province (Arak, Farahan, Sarough and Jirya), namely "review, analysis, and introduction of native and original designs and patterns of Arak Carpet weaving school (Sultanabad)" (Afroogh, 2017) and "Study, analysis, and introduction of new and imported (adapted) designs and patterns in the contemporary carpets of Arak (Sultanabad)” (Afrough, 2018). The present study aimed to introduce the Farahan carpet-weaving school and the design and patterns of its carpets in order to study, investigate, and introduce the Farahan Carpet company and its products. 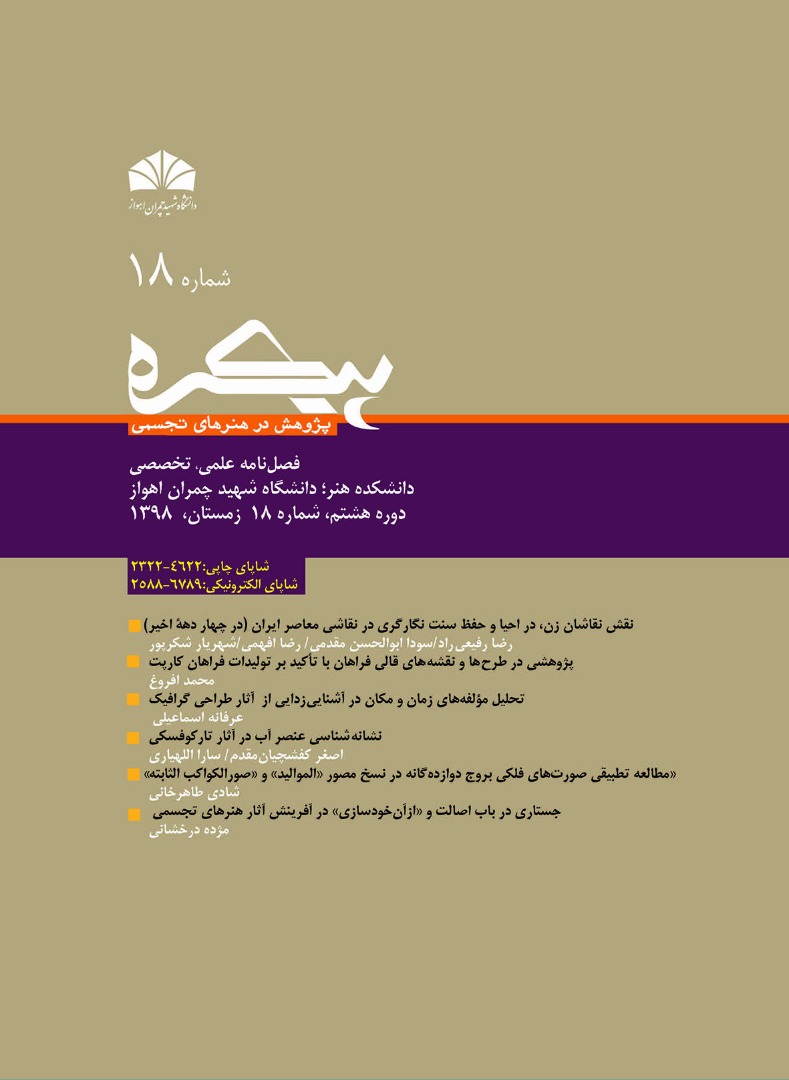